The Hollywood Meets Nashville Grammy Viewing Party and Benefit Gala will be an unforgettable evening of entertainment, food, spirits, live music, and of course, the 58th Grammy Awards telecast on a 10’ mega HDTV! The party kicks off 6pm on Sunday, February 12th at the Nashville Film Institute (NFI)!!!!

The Edie Hand Foundation is an umbrella organization that supports numerous charities including The Children’s Hospital of Alabama and St. Jude Children’s Research Hospital. The non-profit organization contributes funds and many volunteer hours helping in hospitals, and participating in local and regional events to help special needs children and other programs. Additionally, events are held separately or in conjunction with other organizations to raise money and awareness of the foundation’s efforts. Organizations that have benefitted from the foundation’s activities include the Ramini Kids Foundation, the YouPaveTheWay Program, Ryans Reach, Making Strides, Christmas Spirit Foundation, Country Cares for St. Jude’s Kids, KidsTalk.org, VSA of Alabama, and Cooking With Cancer, Inc.

Established in 2012, the mission of the Women Survivors Alliance has been to establish a network where women affected by cancer can find their voice, improve their quality of life, and embrace their 2nd Acts. The WSA is an all-volunteer organization and 94 cents of every $1.00 donated goes towards programs that empower, educate, and connect women whose lives have been touched by cancer. SURVIVORville is the flagship event of the organization, and is held every two years in Nashville. The event provides tools and information that help cancer survivors re-build their lives after cancer.

This unforgettable event will give invited guests the opportunity to enjoy the awards telecast in an exciting environment with extraordinary people, while supporting worthwhile charities and this exclusive invitation-only affair is a fundraiser, so please come prepared to support two very worthy charities with your heartfelt contribution
and help us meet our donation goals!

WordPress.com is excited to announce our newest offering: a course just for beginning bloggers where you’ll learn everything you need to know about blogging from the most trusted experts in the industry. We have helped millions of blogs get up and running, we know what works, and we want you to to know everything we know. This course provides all the fundamental skills and inspiration you need to get your blog started, an interactive community forum, and content updated annually.

The list of performers at the upcoming Hollywood Meets Nashville Grammy Viewing Party and Benefit Gala will be truly diverse as Nick Riggins of the CMT reality series, “Tobacco Wars” and his band, The Hard Dogs, join International gospel heavyweight, T-Ran, and country rapper, Tim Chance to topline the February 8th event at NuMynd Film Studios in Nashville.

Nick Riggins is a multi-talented musician, actor, songwriter and farmer. He recently starred in the CMT reality series, “Tobacco Wars.” On the series, he showcased his skill as a dark fire tobacco farmer, growing tobacco for cigars, while highlighting his skills on the concert stage, with his signature hit, “Farmed and Dangerous.” He has completed a new album for the Swat Music Label, which will be released this spring.

T-Ran Gilbert is currently headlining his annual “L.A.N.D. (Live And Not Die) Tour,” promoting his Live And Not Die EP, and recording his follow-up release, “The Imprint.” His debut video, “Need You Now,” took the country by storm when it reached over 1.3 million views and was added national rotation on the MTV circuit and thousands of other outlets, a real feat for an indie release. T-Ran Gilbert’s positive message and music is penetrating lives around the globe since he teamed up with Mahatma Gandhi’s grandson, and taken his positive life-affirming message to the streets for a “Season of Non-Violence Tour.”

The Hollywood Meets Nashville Grammy Viewing Party and Benefit Gala is an annual event that brings together Nashville’s creative community to raise funds for worthwhile charities, as participants enjoy a red carpet, Hollywood caliber soiree. This year, the event will support two local charities battling hunger in Middle Tennessee. The Old School Farm is a unique non-profit dedicated to producing quality farm-to-table food while providing meaningful employment for individuals with intellectual disabilities. Sugga Momma’s Girls Club helps families in the inner city by providing cooking classes for youngsters with an emphasis on healthy food choices, and free Saturday lunches for neighborhood kids in danger of going hungry every weekend. 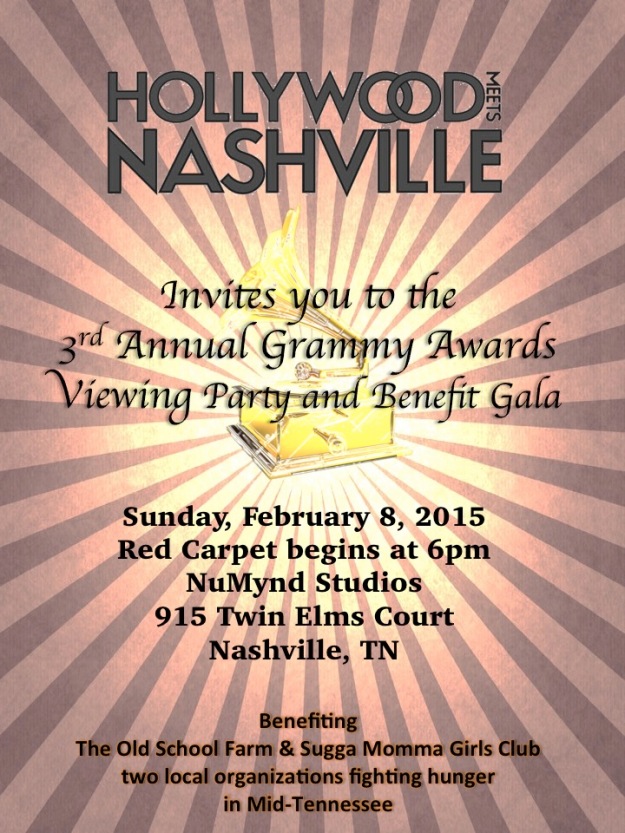 This event is not affiliated with, endorsed by, or licensed by The Recording Academy or the GRAMMY Awards.

Get ready for the next big event, the annual HMN Grammy Viewing Party and Benefit Gala! We will be working with three wonderful local charities hard at work battling hunger, right here in Middle Tennessee.

The Old School Farm is a unique non-profit dedicated to producing quality farm-to-table food while providing meaningful employment for individuals with intellectual disabilities. This amazing organization has opened their doors to Hollywood Meets Nashville and has allowed us to utilize The Old School as the venue for the 2015 Grammy Viewing Party and Gala.

Sugga Momma’s Girls Club helps families in the inner city by providing cooking classes for youngsters with an emphasis on healthy choices.  The unique program utilizes fun, food education, and fitness to help change negative eating habits among those most affected by obesity related diseases. Additionally, Sugga Momma’s has established a Saturday “free” lunch program where neighborhood kids come to sing and move, while enjoying a healthy lunch prepared by their peers!

Save the Date, and prepare for an amazing evening of great music, great food and a chance to support three VERY WORTHY CHARITIES.

The 12th Annual Hollywood Meets Nashville Summer Bash will, once again, kick off CMA Festival week with another Hollywood caliber event! As usual, this event will feature live musical performances by a diverse array of artists (A list of performers will be posted soon!)    This event always attracts a diverse array of tastemakers and personalities; actors, athletes, directors, musicians, producers, writers, and movers’ n shakers from LA, New York and Nashville’s best. Look forward to an evening of key networking opportunities, amazing food, drink and more.

This summer’s event will benefit two great organizations, Save the Music America and the International Black Film Festival of Nashville. Please help us support these worthy endeavors!

The Nashville Notes Homeschool Band was presented with a brand new violin, Sunday night, at the Hollywood Meets Nashville Grammy Viewing Party and Benefit Gala.   The Nashville Notes Homeschool Band was founded in 1995 to provide music instruction for students schooled at home in the Greater Nashville area.  “We’re very thankful for this donation,” says program director, Sholeen Wuest. “We have 170 kids in the program, and very few instruments for those who can’t afford to purchase their own.  This instrument will be put to good use.”

The Grammy Viewing Party was a fundraiser for two organizations, Save the Music America and the Global Music Project.  Save The Music America is a social and educational organization that educates the public about the impact of illegal downloading, creating public support for preserving the rights of people within the creative industries and the history of American Music.  The Global Music Project uses music to help the socially conscious make a difference. Their current mission is to provide musical instruments to school children, locally and abroad.   They partnered with Mozart Violins in Irvine, California, to furnish the violin that was presented to Nashville Notes. 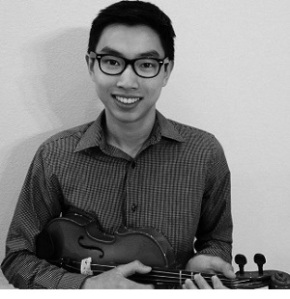 We want to thank Jason Chan at Mozart Violins for making this moment possible!

For more info check out:

Buddy Jewell quickly rose to fame in 2003 as the first winner of USA Network’s “Nashville Star.” His hits include “Help Pour Out the Rain (Lacey’s Song)” and “Sweet Southern Comfort.” He is a diverse and charismatic performer, with an extensive fan base which extends well beyond the country and gospel genres. From children to NFL players, Buddy appeals to music fans of all ages, from all walks of life. His recent video “Reason to Read” (with Patty Loveless) has even become a success with the youngsters who watch PBS’ award winning educational show, “Between the Lions.”

J. Karen Thomas currently stars as Audrey Carlisle on the hit ABC series, “Nashville.” A dedicated actress, she also enjoyed a stint on “Drop Dead Diva” and recently completed the Ashley Judd vehicle, “Identical” and “Boulevard” with Robin Williams.  J. Karen has a passion for music and her new CD, “Love Just Happens” is a romantic collage of jazz, pop, standards and spiritual originals.

Montrel Darrett began singing as a child, wrote his first song at four, and formed his first group, the True Notes, with his siblings as a teenager. Montrel later joined the award winning gospel group Commissioned, and performed and recorded with them for a number of years. Montrel left the group to pursue a solo career in 1999.  He also writes and produces for other gospel acts including Virtue, Sharon Riley, and Faith Chorale.

Bridgette Tatum is no stranger to the top of the country charts.  She wrote the 2009 Jason Aldean hit, “She’s Country”.  Her song, “Loud” was recorded by Big & Rich and was the theme music for John Rich’s reality show, “Gone Country.” Bridgette hit the charts herself with “I Like My Cowboys Dirty” and “Hillbilly Rockstar” and recently toured with Heidi Neufield.

The 2nd annual Hollywood Meets Nashville Grammy Viewing Party and Benefit Gala will be an unforgettable evening of entertainment, food, spirits, live music, and of course, the 56th Grammy Awards telecast on a 10’ mega HDTV!

This year’s event will benefit two wonderful organizations – the Global Music Project and Save the Music America.  The Global Music Project is a 501(c)(3) non-profit organization helping others make a difference through the power of music, by organizing concerts for causes, charity events, and promoting volunteerism.  Their current mission involves providing musical instruments to school children, locally and abroad.  Save The Music America is a social and educational organization that is dedicated to preserving the arts, the rights of musicians and filmmakers, and the history of American music.

This unforgettable event will give invited guests the opportunity to enjoy the awards telecast in an exciting environment with extraordinary people, while supporting worthwhile charities and educational programs.

This exclusive invitation-only affair has no admission charge, but it is a fundraiser, so please come prepared to support two very worthy charities!

The 11th Annual Hollywood Meets Nashville Summer Bash will kick off CMA Festival week.  As usual, this event will feature live musical performances of a diverse array of genre’s including rock, country, jazz and R&B.

This invitation only event brings together a diverse array of tastemakers, and personalities; actors, athletes, directors, musicians, producers, writers, and movers’ n shakers from LA, New York and Nashville’s best.

This summer’s event will support The Second Harvest Food Bank.

The mission of The Second Harvest Food Bank is to feed hungry people and work to solve hunger issues in our community.  Last Year the organization provided more than 16 million meals to hungry children, families and seniors.